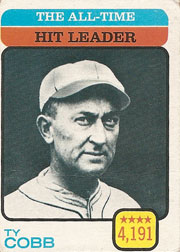 About This Player
Ty Cobb, also known as "The Georgia Peach", enjoyed an illustrious 24-year career with the Detroit Tigers and the Philadelphia Athletics.  Throughout his career, Cobb won 11 batting titles, led the American League in hits eight times, won one Triple Crown in 1909 and a Most Valuable Player award in 1911.  At one time, Cobb held the all-time records for nearly every major batting category, including batting average, hits, and runs scored.  Cobb also managed the Tigers while as a player for six seasons.  Cobb was one of five charter members of the Baseball Hall of Fame inducted in 1936.

Ty Cobb had held of the record for career hits for 62 years until the record was broken by Pete Rose in 1985.

For more information about Ty Cobb:
The Official Web Site of Ty Cobb

About This Card
Ty Cobb is shown with a total of 4,191 hits.  In 1981, however, The Sporting News reported that a historian from the Society of American Baseball Researchers (SABR) discovered that Ty Cobb was awarded two hits too many in 1910 and that his true hit total was 4,189.  With Pete Rose in the midst of reaching Cobb's record, Major League Baseball had ignored overwhelming proof that a mistake was made.  Announced by Commissioner Bowie Kuhn at the time, "The passage of 70 years, in our judgment, constitutes a certain statute of limitation as to recognizing any changes."  Cobb's official total of 4,191 hits remains today, while most baseball encyclopedias and record books use 4,189. 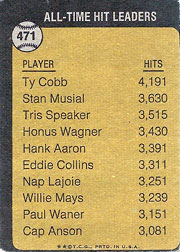