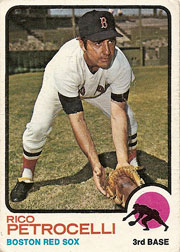 About This Player
Rico Petrocelli was known for his outstanding play in the field during his entire 13-year career for the Boston Red Sox.

Petrocelli played one Major League game in 1963.  Two years later, he returned to the big leagues and established himself as the team's starting shortstop.  As a shortstop, Petrocelli started in two All-Star games and led the American League twice in fielding percentage.  In 1969, Petrocelli hit 40 home runs, a record at the time for a shortstop and tied a record for fewest errors by a shortstop.  When the Red Sox acquired Luis Aparicio, Petrocelli moved to third base, where he also led the American League twice in fielding percentage.  Petrocelli retired in 1976 after suffering from a series of injuries.

Petrocelli would continue to remain involved in baseball after his playing career as a minor league coach and manager and as a broadcaster.

Petrocelli authored a book titled Rico Petrocelli's Tales from the Impossible Dream Red Sox, which chronicles his time with the 1967 Red Sox.

About This Card
It is hard to tell from the scan, but this card in particular is full of creases.  I wonder if this card had a lot of love from a Red Sox fan before arriving as part of my set or if it just got stuck at the bottom of a toy chest. 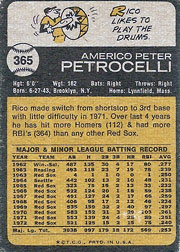