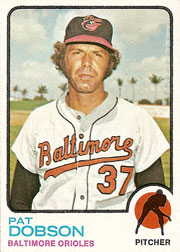 About This Player
Pat Dobson pitched 11 seasons in the Major Leagues spending time with the Tigers, Padres, Orioles, Braves, Yankees and Indians.

Dobson's finest season came in 1971 as part of the Orioles' "Big Four" pitching staff, along with Dave McNally, Mike Cueller and Jim Palmer, who each won 20 games that season.  Dobson pitched to a record of 20-8 with an ERA of 2.90 and 187 strikeouts.  He posted a twelve game winning streak (including nine consecutive complete games) and a scoreless inning streak of 23.  Later that fall, Dobson threw a 2-0 no-hitter against the Yomiuri Giants at Tokyo, the first no-hit game in the Japanese-American baseball exhibition history.

Dobson was traded before the 1973 season to the Altanta Braves and later traded again in the middle of the season to the New York Yankees.

After his playing days, Dobson remained in baseball, working as a pitching coach, advance scout and later as a baseball executive.  Dobson joined the Giants as a special assistant to the general manager in 1997 and remained in that position up to the time of his death.  Dobson died a day after he was diagnosed with luekemia on November 22, 2006 at the age of 64.

About This Card
Despite a 20-win season in 1971, I would have thought Topps could have found more to say about Dobson on his card than he "suffered a broken toe." 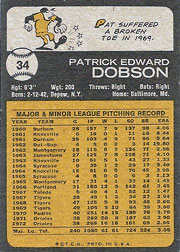