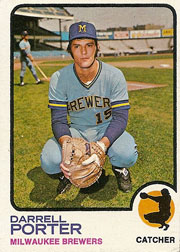 About This Player
Darrell Porter spent 17 seasons in the Major Leagues and his first six with the Milwaukee Brewers.  Porter was the Brewer's first round draft pick in 1970 and made his pro debut in 1971.  Porter finished third in Rookie of the Year voting in 1973 and was selected to the All-Star team for the first time in 1974.

His finest seasons, however, came after he was traded to Kansas City in 1976.  As a member of the Royals, Porter was selected to three more All-Star teams, including a start in 1979.  Also in 1979, Porter scored 101 runs, drove in 112 and walked 121 times to become only the sixth catcher in Major League history to with 100 runs and 100 RBIs in the same season (preceded by Mickey Cochrane, Yogi Berra, Roy Campanella, Johnny Bench and Carlton Fisk) and only the second also with 100 walks (preceded only by Mickey Cochrane).

Porter signed as a free agent with St. Louis in 1981 and earned NLCS MVP and World Series MVP honors to lead the Cardinals to the championship in 1982.

Porter signed with the Texas Rangers in 1986 and played his final game in 1987.

Off the field, Porter was known to have substance abuse problems and one of the first American athletes to admit his problem publicly.  He fought to overcome his problems, became a born-again Christian and served actively with the Fellowship of Christian Athletes as a spokesman for the "One Way To Play Drug Free" program.  Unfortunately, Porter died August 5, 2002 from complications of cocaine use. 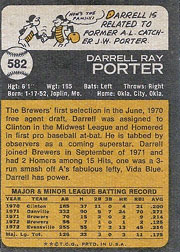