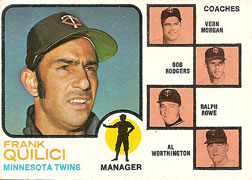 About This Manager
Frank Quilici is the only person to play, coach, manage and broadcast for the Twins.  Quilici enjoyed five seasons as a utility infielder for the Minnesota Twins from 1965 through 1970.  Quilici, however, started in 56 games in 1965, after second basemen, Bernie Allen, went down to injury.  He also started all seven games of the 1965 World Series.  In Game 1, Quilici singled and doubled off of Don Drysdale in the third inning to tie a World Series record for most hits in an inning.  Immediately after his playing career ended, Quilici became a coach for the Twins and took over the role of manager in 1972.  In his four seasons as a manager, Quilici finished with a 280-284 record and never the Twins never finished above third place in the AL West.  After he was dimissed as manager, Quilici went on to work in the broadcast booth calling Twins games throughout the '70's and '80's. 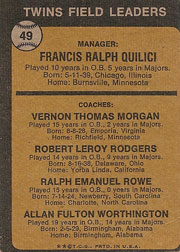