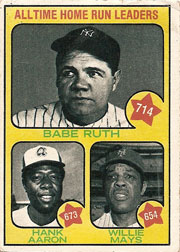 About This Opening Day
As Opening Day started in 1973, baseball enthusiasts watched in anticipation as Hank Aaron was closing in on baseball's all-time home run record.  Only 42 homers away from breaking Ruth's mark, and considering Aaron his 34 the year before and 47 the year before that, there was a small possibility that Hank Aaron could break the record in 1973.

Babe Ruth held a mythic record long thought to be unattainable.  Before Aaron and Mays began their careers, the player second on the home run list was Jimmie Foxx with 534 home runs, 180 short of Ruth.  Ruth would hold the record for 53 years.

Hank Aaron, 39 years old at the time, still remained a productive hitter.  Despite never hitting more than 50 home runs in a season, Aaron continued to rank in the home run ranks with his consistency and longevity.  Aaron would end the 1973 season with 40 home runs, only one short of Ruth's mark and two from breaking the record.

Willie Mays was third on the home run list at the time and still active in 1973.  When Mickey Mantle retired in 1968, third on the list at that time, Mays ranked second and looked like he could take the record.  However, his production decline in the following year.  In 1973, Mays would hit only 6 home runs in his final season with the New York Mets.

About This Card
Topps capitalized on the home run chase by featuring Ruth, Aaron and Mays as the first card in the first series of the set.  Topps continued featuring all-time records later in the fourth series. 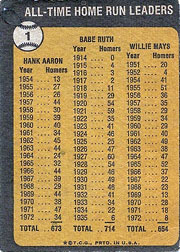