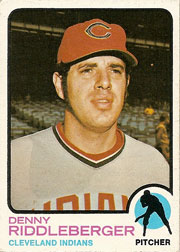 About This Player
Denny Riddleberger enjoyed a very brief three year career as a Major League reliever.  Riddleberger was drafted by the Pittsburgh Pirates, made his pro debut with the Washington Senators and was traded in 1972 to the Cleveland Indians.  A sidearm pitcher known for his curve, Riddleberger led all Indians relievers with a 2.50 ERA, but 1972 would be his final season in the Major Leagues at age 26.

Riddleberger had a career earned run average of 2.77 in his three seasons.  He pitched the 1973 season in the minors, but he would never return to the big leagues.  It is not clear to me why a player with modest numbers only played in the big show so briefly.


"It always surprised Ted when players who had been around awhile didn’t think about hitting the way he did, when they didn’t learn to pay attention to what a pitcher was throwing and how the ball moved. He told a story about watching a game on television and seeing Boog Powell, Baltimore’s big left-handed-hitting first baseman, being fooled again and again by a slow looping curve ball. Powell had a big stride and a big swing; he’d swing himself almost into the ground. Ted said that as he watched the game, he thought for sure Powell would start looking for that curve ball but he never seemed to, and it had made Ted laugh to see Powell keep making that big swing of his and keep missing the ball. I don’t know who the pitcher was in the game that Ted saw on TV, but in ’70 and ’71 we have a young left-handed pitcher named Denny Riddleburger who also had a big slow curve ball. When we played Baltimore, Ted would bring Riddleburger in to pitch to Powell. Denny would serve up a big slow curve and Powell would stand there and cock and cock and cock the bat, and then swish, he’d swing and miss it entirely. Every time Denny pitched to Boog, Ted would be hiding in the corner of the dugout where the fans couldn’t see him, laughing, with tears running down his face. Riddleburger would throw another one and Ted would throw up his arms and his legs and laugh and laugh. Once in a while Powell would foul one off. I don’t know how many times Powell faced Riddleburger but I doubt he ever did hit a fair ball off of him." - Wayne Terwilliger, Terwilliger Bunts One

About This Card
While many collectors cite the 1973 Topps design as the most lackluster from the decade, I enjoy it because of its simplicity.  The thick black border around the photograph brings the focus of the card to the player and action.  The player name stands out, but does not distract.  The team name is subtle, but noticeable and the position icon in the bottom right enhances the card. 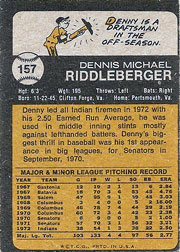