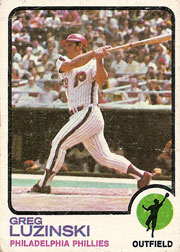 About This Player
Greg Luzinski enjoyed 15 seasons in the Major Leagues.

Luzinski, also known as "The Bull," was drafted in the first round of the 1968 draft and made his debut with the team in 1972.  He soon established his spot as the starting left fielder late in the 1973 season.  Luzinski earned four All-Star selections with the Phillies, with three of those starting in left field and one of those as the National League's top vote-getter.  He also finished 2nd in MVP voting twice.  Luzinski also received the Roberto Clemente Award in 1978.

The blog, Phillies Nation, regards Luzinski as number 17 on their listed of 100 Greatest Phillies.

After a poor 1980 season with the Phillies, his contract was sold to the Chicago White Sox, with whom Luzinski would become their regular designated hitter.  Luzinski played his final game in 1984.

In 1989, Luzinski was inducted into the National Polish-American Sports Hall of Fame

About This Card
Although he was just starting his big league career, Topps captured Luzinski in, what soon came to be, his signature form. 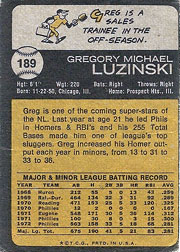