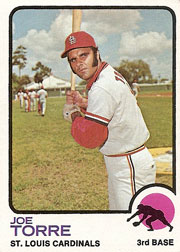 About This Player
Joe Torre enjoyed 18 seasons as a Major League catcher, third baseman and first baseman.  A nine-time All-Star, Torre spent his playing career with the Braves, Cardinals and Mets.  Torre's finest season came in 1971 in which he led the league in hits, RBIs and batting average and was selected the National League Most Valuable Player.

Torre might be better known for his managerial success.  In 1977, Torre played as a player/manager for the Mets.  He later went on to manage five different teams, including leading the New York Yankees to four World Series championships.  Torre also received Manager of the Year recognition in 1996 and 1998.

Joe also has a brother, Frank, who enjoyed seven seasons with the Braves and Phillies.

About This Card
Joe Torre is listed as a third baseman in the 1973 Topps set.   While Torre did play mostly 3rd in the previous season, he started most of his games at 1st base in 1973. 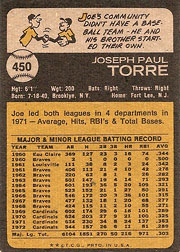