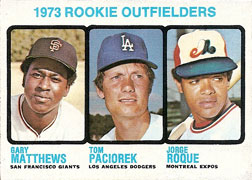 Tom Paciorek enjoyed 18 seasons in the Major Leagues with the Dodgers, Braves, Mariners, White Sox, Mets and Rangers.  His finest season came in the strike-shortened season of 1981 with the Mariners in which he hit .326 with 14 home runs and 66 RBIs and was selected as an All-Star.  His brothers, John and Jim each saw playing time in the Majors very briefly.

Jorge Roque played in 65 games over four Major League seasons.  Roque played for the Cardinals from 1970 through 1972.  He was traded to the Expos prior to the 1973 season for veteran catcher, Tim McCarver.  Roque played his last game in the Majors in 1973. 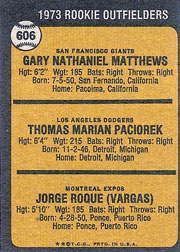