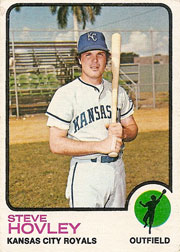 About This Player
Steve Hovley played five seasons in the big leagues in the out.  Originally drafted by the Angels, Hovley was selected by the expansion Seattle Pilots and made his Major League debut in the middle of the 1969 season. Jim Bouton, Seattle Pilots pitcher and author of Ball Four, recounts in his book problems Pilots' management had with Hovley because of his long hair and penchant for reading Dostoyevsky.

Hovley was with the team when they moved to Milwaukee to become the Brewers.  He was traded in the middle of the 1970 season after an incident with Brewers' manager, Dave Bristol.  Hovely showed up late for a day game against Cleveland and refused to pay the team fine.

After Hovley was traded to the A's, his numbers dropped significantly.  After batting .111 with the A's in 1971, he was sent to the minors and spent the rest of the season with AAA Iowa.

Hovley was selected by the Kansas City Royals in the Rule 5 draft and played the next two seasons as the fourth outfielder.  Hovley played his last Major League game in 1973 and would spend the next season in the minors before retiring.

About This Card
Appears to be a Spring Training photo of Hovley.  I don't know what Spring Training was like in 1973, but, based on the bleachers and the fencing in the background, I'd imagine it was like playing in Little League ballparks. 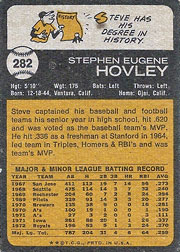