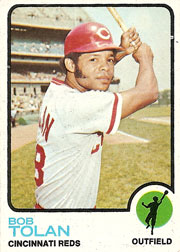 About This Player
Bobby Tolan played 13 seasons in the Major Leagues and four of those seasons with the Cincinnati Reds.  Tolan made his big league debut in 1965 with the Cardinals.  Tolan was traded to the Reds before the 1969 season and began to flourish as a star outfielder in Cincinnati.  Tolan enjoyed his finest season in 1970 in which he hit .316 and lead the National League with 57 stolen bases.  Tolan missed the entire 1971 season after rupturing his Achilles tendon playing basketball, which violated a clause in his contract.  Tolan came back strong in 1972 with winning the Hutch Award and the Comeback Player of the Year Award; he was the second player to win both awards and the first to do so in the same year.

His 1973 season, however, was disastrous.  His batting average plummeted to .206 and Tolan became a distraction on the team.  Struggles grew between him and management, who were still unhappy about his 1971 injury.  Tolan left the team without two days notice in August and grew a beard, which violated team rules.  Tolan was suspended by the team on September 27 and missed the remainder of the season and the post-season.  After the season, the Reds traded Tolan to the Padres, but the MLBPA filed a grievance on his behalf.  Tolan won the grievance and demanded a public apology from the Reds, but never received it.

Bobby's son, Robbie Tolan, was a prospect in the Washington National's organization.  On December 31, 2008,  Robbie was shot by a policeman allegedly investigating reports of a stolen car after a confrontation in the Tolan driveway. The younger Tolan was unarmed and driving his own vehicle. The bullet lodged in Tolan's liver; the injury may have ended his professional baseball career. An investigation into the shooting is on-going.

About This Card
Tolan has always been recognized as "Bobby" in official Major League records and throughout baseball, but Topps has always displayed his name as "Bob" on all of his cards. 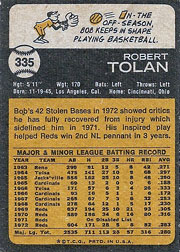