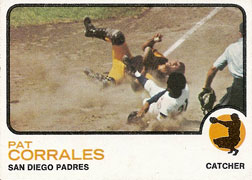 About This Card
The photograph on this card shows game action that took place on June 14, 1972.  In the bottom of the 2nd inning, the Cubs #31, Fergie Jenkins, attempts to score when he is called out after, what appears to have been, a mighty collision at home plate.  This game was Corrales' second with the Padres and Jenkins would earn the win in a 12-9 Cubs victory. 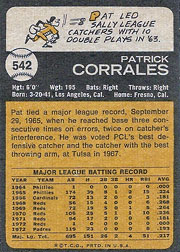