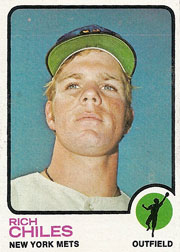 About This Player
Rich Chiles enjoyed parts of six seasons in the Major Leagues for the Astros, Mets and Twins.  He bounced between the big leagues and the minors early in his career.  Chiles was acquired by the Mets in a trade that sent Tommie Agee to the Astros.  He did get his chance to play in center field for the Mets, but, after eight games and batting only .180, was sent back to the minors.  Chiles did see some significant playing time when he was picked up by the Twins.  He served some time as an outfielder and designated hitter for two seasons before the Twins release him.

About This Card
When Topps went to a single series starting in 1974, they lost the advantage of having players updated with their new teams in their later series.  In this sixth series card, Chiles is depicted with this new team... even if an airbrushing job had to be done to show part of the Mets logo on the cap. 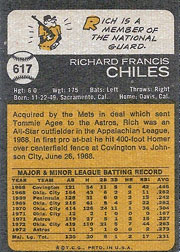