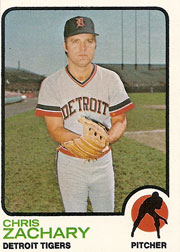 About This Player
Chris Zachary enjoyed nine seasons in the Major Leagues, though bounced in and out of the minors throughout his entire career.  Zachary made his big league debut in 1963 with the Colt .45's and spent his first five seasons in Houston.  Zachary spent time later on with the Royals, Cardinals, Tigers.  Zachary played his final Major League game in 1973 with the Pirates.

About This Card
Not much can be said about Zachary's career, but, probably, the biggest highlight of his career is featured on the back of his card.  Zachary pitched against Willie Mays, Willie McCovey and Orlando Cepeda in his pro debut. 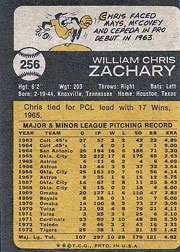