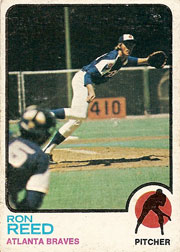 About This Player
Ron Reed spent 19 seasons in the Major Leagues as a starting pitcher and a reliever.  Reed made his big league debut with the Braves in 1966.  He was still considered a rookie in 1968 and was send to the All-Star Game, the first Braves rookie to have been selected.  His finest season was in 1969 in which Reed won 18 games with a 3.47 ERA, 160 strikeouts and guides Altanta to their first National League Division title.  Reed continued his role in the starting rotation throughout his years with the Braves.  After Reed was traded in 1976, the Phillies converted him to a reliever and pitched in six postseasons for the team.

For a brief time, Reed was a two-sport athlete.  At 6 feet, 6 inches, he played for the Detroit Pistons from 1965 through 1967 before devoting himself full-time to baseball.

Ron Reed was inducted into the National Polish-American Sports Hall of Fame in 2005.

About This Card
Another fun action shot from the 1973 set, this time of Ron Reed fielding a play from the pitchers mound. 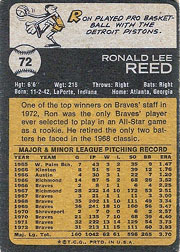