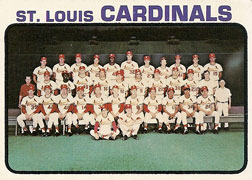 About This Team
The St. Louis ball club was first established in 1882, but adopted the Cardinals moniker in 1900.  In 1972, the Cardinals finished in 4th place in the National League East.  In 1973, they finished in 2nd place.

About This Card
A couple of things to note.  First, unlike most team photos which are shot on the field, this one, comparing lighting, background and shadows, appears to have been shot in a studio.  Second, while the Cardinals had been in existence for many years, one current Cardinal at the time, Bob Gibson, as can be seen on the back of the card, had already attained team records in strikeouts, shutouts and ERA.