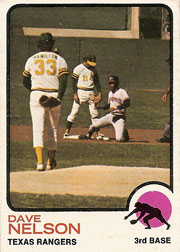 About This Player
Dave Nelson played ten seasons in the Major Leagues with three different teams.  Nelson made his big league debut with the Indians in 1968.  He spent two seasons in Cleveland before he was traded to the Washington Senators in 1970.  Nelson soon became the team's starting third baseman and moved with the team when they became the Texas Rangers.  Nelson's finest season came in 1973 in which he started at 2nd base, hit for a .286 batting average with 165 hits and earned his only All-Star selection.  Nelson was later traded to the Royals in 1976 and played his final two seasons in Kansas City.

Nelson is currently as pregame analyst for the Milwaukee Brewers on Fox Sports Wisconsin.

About This Card
This photograph shows Dave Nelson after sliding into second base, even if he only appears in the background of the shot.  With Dave Hamilton at the pitcher's mound and Ted Kubiak covering second, we can do some photo matching to trace this game back to July 30, 1972.  In the second game of a doubleheader, Nelson hit 3 for 5 with three singles, two runs and two RBIs.  Nelson also stole 2nd base twice off of Hamilton and catcher Gene Tenace and shown on the card is one of those two steals.  The Rangers won the game 4-2. 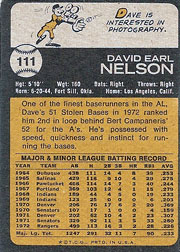