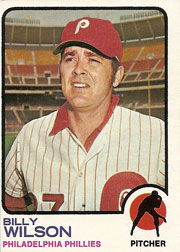 About This Player
Bill Wilson pitched in relief with the Philadelphia Phillies during his five Major League seasons.  Wilson made his big league debut in 1969.  However, throughout his career, Wilson had bounced in and out of the minors.  Wilson pitched his last Major League came in 1973.  Wilson did play a full season for the minor league Reading Phillies in 1974, but retired after the end of the season. 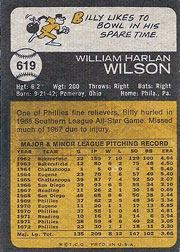