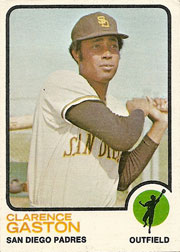 About This Player
Cito Gaston enjoyed 11 seasons in the Major Leagues and six of them with the San Diego Padres.  Gaston made his big league debut with the Braves in 1967 and played in nine games that season.  Gaston was later selected by the Padres in the expansion draft in 1969.  His finest season came in 1970 in which Gaston hit .318 with 29 home runs, 93 RBI and was selected to the All-Star Game.  Gaston never matched those offensive numbers throughout the rest of his playing career.  Gaston was traded to the Braves for Danny Frisella in 1975.  His contract would be purchased by the Pirates in September 1978 with whom he would play his final two games.

The team's success decline in the following years, Gaston was fired in 1997.  Gaston returned to the Blue Jays has a hitting coach from 1999 through 2001.  In 2002, Gaston was hired in an excutive position in the Blue Jays front office.  He managed the team again in 2008 and retired from managing in 2010.

About This Card
The baseball cards from Cito's playing career are all scribed as "Clarence."  His manager cards all read as "Cito."

Gaston is also shown here before sporting his signature mustache.

Interesting cartoon on the back states that Gaston his .317 in May 1971.  Considering that he ended the season with a .228 batting average, his hitting must have been horrid for the rest of those months. 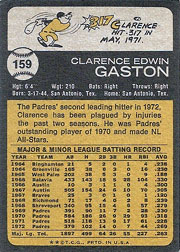