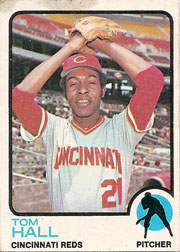 About This Player
Tom Hall enjoyed ten seasons at the Major League level with four different teams.  Hall made his big league debut with the Twins in 1968.  Hall established himself as a reliever and spot starter, but he had his best years after he was traded to the Reds for Wayne Granger in 1972.  That year, Hall pitched to a 10-1 record with 8 saves and a 2.61 ERA.  Hall followed his performance the next year with an 8-5 record with 8 saves and a  3.47 ERA.  In 1975, Hall pitched in two games before he was traded to the Mets for Mac Scarce.  Hall would be traded again to Kansas City the following year and help the Royals to their first divisional crown.

About This Card
Hall received his nickname "The Blade" for his six-foot 150-pound stature. 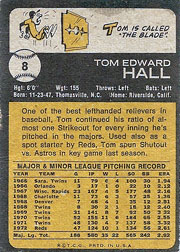