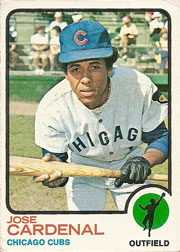 About This Player
Jose Cardenal played in 18 big league seasons with nine different teams.  Cardenal was a line drive hitter with good bat speed, an aggressive baserunner with excellent speed and a versatile fielder with good range and a strong throwing arm.  Cardenal stole 20 or more bases ten times and spent his career playing the three outfield positions.

Cardenal made his Major League debut with the Giants in 1963.  Cardenal had his longest tenure with his sixth team, the Chicago Cubs, for six seasons.  As the Cubs' right fielder in 1973, Cardenal led the team in batting average (.303), doubles (33) and steals (19) and was named Chicago Player of the Year by the Chicago baseball writers.  He might be better known to Cubs fans as the player who missed one Spring Training game because of a cricket in his room and another game because his eyelids were stuck.  Cardenal retired in 1980 with the Kansas City Royals after the team had reached the World Series.

For more information:
"Jose Can You See?" - Chicago Now

Jose Cardenal is a cousin of Bert Campaneris.

About This Card
Jose Cardenal displays his classic bunting form. 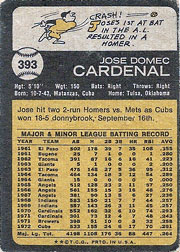