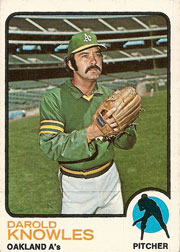 Knowles was also known for his defensive, leading the American League in range factor in 1972 and picking off runners at a rate of one per 24 innings; one of the highest rates in Major League history.

About This Card
Darold Knowles is shown sporting the mustache that became a signature trait for the 1972 Oakland A's.  The mustaches started when Reggie Jackson showed up to spring training that season sporting a mustache.  A's owner, Charlie Finley, did not like the mustache, but also did not want to confront Jackson.  Finley wanted the rest of the team to start growing mustache so that Jackson might feel less individualist and shave his off.  However, as other players started to follow Jackson's lead, Finley began to like the look and encourage the rest of the team, as well as manager, Dick Williams, to grow mustaches.  By Father's Day, all 25 players on the roster were sporting mustaches.

Knowles continued to sport the mustache after his days with the A's at least until he was photographed for his 1980 Topps card.

For more information:
Thirty Years Ago... Birth of the Mustache Gang 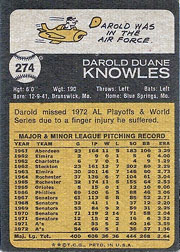