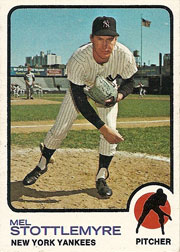 About This Player
Mel Stottlemyre pitched his entire 11 year career with the New York Yankees.  Stottlemyre was called up from the minors in the middle of the 1964 season and was soon thrust into the spotlight as the Yankees' ace pitcher.  In the 1964 World Series, Stottlemyre made three starts against Cardinals' ace Bob Gibson: Stottlemyer earned the win in Game 2, received a no-decision in the Yankees' loss in Game 5 and received the loss in Game 7 as the Cardinals won the World Series.

Stottlemyre would continue to rise as one of Major League Baseball's premier pitchers.  Stottlemyre won at least 20 games in three of his seasons, was selected as an All-Star five-times (including the start in the 1969 All-Star Game) and had a career ERA of 2.97.  However, the Yankees would never reach the postseason during his career.  A torn rotator cuff would force an early end to Stottlemyre's pitching career in 1974 at the age of 32.
Stottlemyre would continue working in baseball as a pitching coach for a number of teams throughout the years.  Stottlemyre returned to the Yankees as the pitching coach for manager, Joe Torre, from 1996 through 2005 and would be a part of four World Series Championships.

About This Card
One of my favorite portraits in the 1973 set, Stottlemyre is featured in his throwing pose with the Yankee Stadium bleachers and the skyline in the background and frames by the possible opposing pitcher on the left and the American flag on the right. 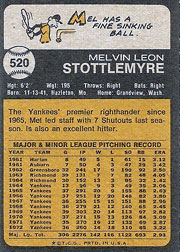