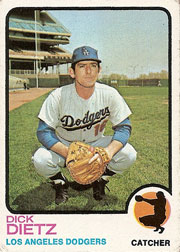 About This Player
Dick Dietz played eight seasons as a big league catcher.  Dietz, nicknamed "The Mule," made his Major League debut with the Giants in 1966 and remained in San Francsico for six seasons.  He was an All-Star in 1970 and a key member of the 1971 National League West Division championship team.

Dietz may be best known for his role in an umpire's controversial decision.  On May 31, 1968 at Dodger Stadium, Dietz had come to the plate in the ninth inning with the bases loaded and no outs to face Don Drysdale, who had pitched 44 consecutive scoreless innings at this point.  With a 2-2 count, Dietz is hit on the elbow with Drysdale's pitch.  With a hit by pitch, Dietz would have taken first base and the Giants would have scored the run and ended Drysdale's streak.  However, the home plate umpire ruled that Dietz did not attempt to avoid the pitch and was not given the base.  Dietz returned to the plate and hit a fly ball out.  Drysdale retired the next two batters to win his fifth consecutive shutout and continue his streak.  Drysdale eventually pitched 58-2/3 consecutive scoreless innings, a Major League record at that time.

For whatever reasons, whether concerns about his decline performance or his involvement in the players' union, Dietz was not offered a contract in 1974 and force to retire at the age of 32.

About This Card
Despite Dietz years with the Giants and his success in 1970 and 1971, I can imagine it might have been hard for Giants' fans to see him in Dodger Blue. 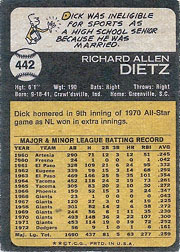