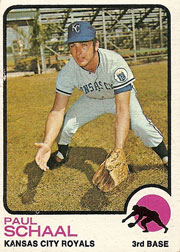 About This Player
Paul Schaal played in 11 seasons in the Major Leagues spread almost evenly between the Angels and Royals.  Schaal signed with his hometown Los Angeles Angels out of high school and made his big league debut in 1964.  He established himself as the Angels' starting third baseman the following year.  In 1968, Schaal was struck in the head by a fastball from Red Sox pitcher, Jose Santiago.  The pitch would leave Schaal with balance problems that would affect him for the rest of his career.  However, his best years were still ahead of him.

The Kansas City Royals selected Schaal in the expansion draft before the 1969 season.  In 1970, Schaal clashed with manager, Charlie Metro.  However, Metro would lose his job in the middle of the season and Schaal would go on to set a team record for consecutive games played.

"Charlie said to the press that I'd never be an every-day player. It ticked me off but it also inspired me." - Paul Schaal


In 1974, Schaal was in the unenviable position to hold on to his job while a hot hitting prospect was waiting in the minors.  In May, George Brett, now in the Hall of Fame, was promoted to the Majors and Schaal was traded to the California Angels.  Schaal would finish his career back where it started and retire at the age of 32.

Schaal returned to Kansas City and enrolled in the Cleveland Chiropractic Clinic.  Today he runs the Schaal Wellness Center in Overland Park, Kansas.

About This Card
Paul Schaal sports a pose similar to player silhouette in the lower right.  In the 1973 set, there is a different silhouette for each position, as well as one for the manager.  Cards of other third basemen in this set all of the same silhouette. 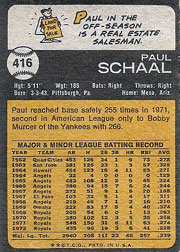