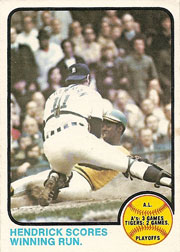 About This Playoff Series
The 1972 American League Championship game paired the Detroit Tigers against the Oakland A's.  In a five-game series, the first two games were played in Oakland Colosseum and the final three at Tiger Stadium.  This series remained close for both teams as the A's won the first two games in Oakland and the Tigers won the next two in Detroit.

Game 5 would prove to play as tight as the previous four games in the series.  The Tigers would score in the 1st inning as Dick McAuliffe came home on a groundout from Bill Freehan.  A's would tie the game in the 2nd inning as Reggie Jackson would score on a double steal.  However, an injury suffered when Jackson collided at home with Tigers' catcher, Freehan, would cost him to miss the World Series.  The A's would score again in the 4th as George Hendrick, Jackson's replacement in center field, came home on a Gene Tenace single.  A's starter, Blue Moon Odom, would continue to persevere and pitch through the 5th inning while Vida Blue would finish the rest of the game and earn the save.  The A's would win 2-1 and go on to their first World Series since the team was in Philadelphia 41 years before.

About This Card
The photograph shows Hendrick scoring from home in the top of the 4th inning under Freehan's tag.  Hendrick reached first on an error from McAuliffe.  He tagged up to second from a sacrifice fly from Sal Bando.  With two outs, Tenace hit a line drive to left field to allow Hendrick to score. 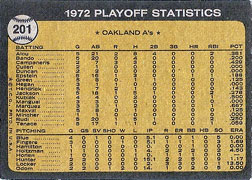