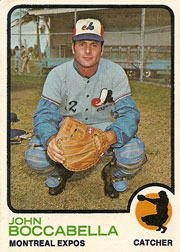 About This Player
John Boccabella enjoyed 12 seasons playing for the Cubs, Expos and Giants.  Boccabella made his first Major League appearance with the Cubs in 1963.  Through his six seasons with the Cubs, Boccabella bounced in and out of the minors and served as a utility man.  Boccabella was selected by the Expos in the expansion draft in 1969 and played primarily a catcher.   His best season came in 1973 in which he caught a career high 117 games.  On July 6 of that season, Boccabella hit two home runs in the 6th inning of the first game of a doubleheader to become the second catcher to hit two home runs in the same inning.  Boccabella was traded to his hometown Giants for pitcher, Don Carrithers prior to the 1974 season and would play his final game that year in San Francisco.

About This Card
John Boccabella in the Expos' baby blue road uniform at Spring Training. 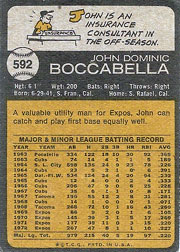