About This Player's Boyhood
As the back of the card describes, Sam McDowell was quite an accomplished player in his childhood.  Sam started out as an outfielder, but his father converted him to a pitcher.  His high school accomplishments include the Pennsylvania State Championship and the Colt League World Series. 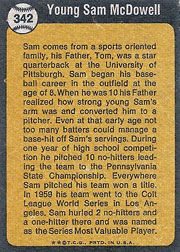