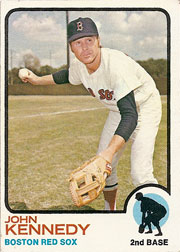 About This Player
John Kennedy enjoyed twelve Major League seasons with five different teams.  Kennedy made his big league debut with the Washington Senators in 1962 and played his first full season as the team's primary third baseman and 1964.  After he was traded to the Dodgers in 1965, Kennedy became a utility infielder playing third, shortstop and second base.  Kennedy joined the Red Sox in 1970 and played until his retirement in 1974.

John Kennedy also had a unique distinction of having his name and birthday shared with President John F. Kennedy, who was born 24 years before. 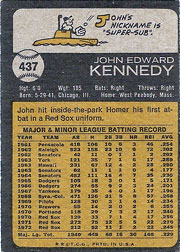