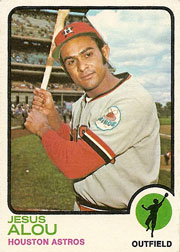 About This Player
Jesus Alou played 15 seasons in the Major Leagues with four different teams.  Alou made his Major League debut with the Giants in 1963 where he joined his older brothers, Felipe Alou and Matty Alou.  On September 10, 1963, the three Alou brothers become the first trio of brothers to bat in the same inning, as well as the same team.  On September 15, all three started in the same outfield.

Alou was drafted by the Montreal Expos in the 1968 expansion draft and was part of the infamous trade to the Houston.  Prior to the 1969 season, Alou and Donn Clendenon were traded to the Houston Astros for Rusty Staub.  However, Clendennon refused to report to Houston.  To satisfy the trade, Jack Billingham, Skip Gunn and cash were sent along with Alou to Houston and Clendenon remained in Montreal.

Alou spent seven seasons with the Astros, but his playing time decreased significant in 1972 with only 14 starts in the outfield (versus 103 starts the year before) and being used most frequently as a pinch hitter or pinch runner.  Alou was sent to the A's in the middle of the 1973 season and played on their 1973 and 1974 World Series teams.  Alou signed with the Mets in 1975 and was released before the start of the next season.  After a two year hiatus, Alou signed with the Astros in 1977 and played his last game in 1978.

In addition to his two brothers, Jesus' cousin, Jose Sosa, and nephews, Moises Alou and Mel Rojas played in the Major Leagues.

About This Card
On his left sleeve, Alou bears the classic Houston Astros logo patch.  This was the first logo the Houston ball club used when they moved into the Astrodome. 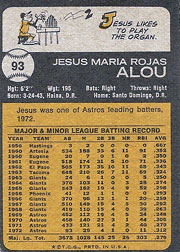