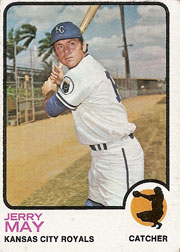 About This Player
Jerry May played 10 seasons in the big leagues with the Pirates, Royals and Mets.  May made his Major League debut with the Pirates in 1964.  He would have the starting catcher role in 1967 and 1968 until Manny Sanguillen was called up.  In 1970, Mays caught the game in which Dock Ellis threw a no-hitter; Ellis claimed he was under the influence of LSD for this game and that Mays wore reflective tape on his fingers to help the pitcher see his target.  May was traded to the Royals in 1971 where he would spend the next two-plus seasons.  May was traded to the Mets in 1973 and later released that year.

About This Card
Jerry May in his batting pose at spring training. 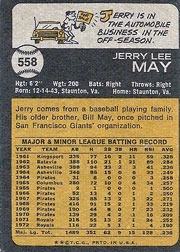