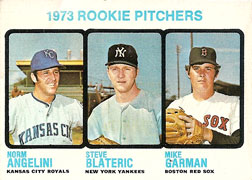 About These Players
Norm Angelini pitched just over 19 innings in relief in 28 games with the Kansas City Royals in 1972 and 1973.   Except for his brief stay in the big leagues, Angelini was a career minor leaguer with a 13 year career spread among the Royals, Braves and Expos minor league systems.

Steve Blateric had very brief call ups with the Reds in 1971, Yankees in 1972 and Angels in 1975.   Also a career minor leaguer, Blateric spent 13 seasons with six different organizations.

About This Card
Steve Blateric appears in an airbrushed Yankees uniform (notice no "NEW YORK" on the chest as well as the funky "NY" logo on the cap) although he only appeared in one game for the Yankees and never played in the Yankees minor league system.  The Yankees acquired Blateric in a conditional deal with the Reds late in 1972.  Blateric was returned to the Reds in the spring of 1973. 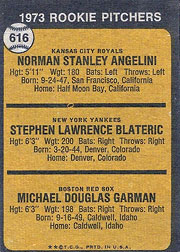