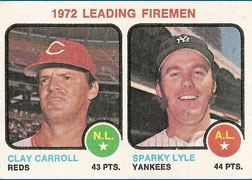 About These Players
Clay Carroll played 15 seasons in the Major Leagues and eight with the Cincinnati Reds.  A two-time All-Star, Carroll lead the National League in 1972 with 37 saves (20 more saves than his previous best number in one season.)  Sparky Lyle spent 16 seasons in the Majors and seven with the New York Yankees.  A three-time All-Star and a Cy Young Award Winner in 1977, Lyle recorded his best save total in 1972 with 35 saves.

About This Card
Early on after the Save had been recognized as an official stat by Major League Baseball in 1969, statisticians and baseball enthusiasts debated often on how to value closers.  In this case, Topps valued a combination of saves and wins by a reliever to recognize their leading "firemen."  Whether or not you count wins in addition to saves, Carroll and Lyle still stood out compared to their peers in the 1972 season. 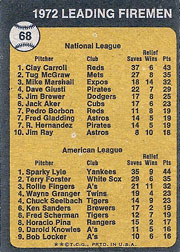