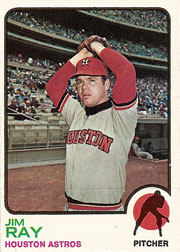 About This Player
Jim Ray enjoyed nine seasons in the Major Leagues and eight of them as reliever for the Houston Astros.  Ray made his big league debut in 1965.  He established himself as one of the team's key relievers in 1968 and earned the occasional win and save.  In 1974, Ray was traded to the Tigers and played his final game.

About This Card
A pitching pose for Jim Ray, but appears to have been taken just before game time at a Major League ballpark. 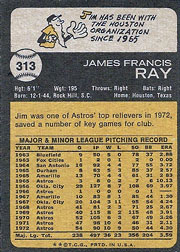