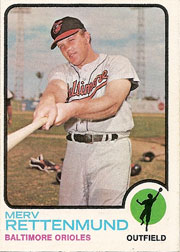 About This Player
Merv Rettenmund enjoyed 13 seasons in the Major Leagues.  Mostly as a fourth outfielder and a pinch hitter, Rettenmund played on six postseason teams, including the 1970 World Series Champion Baltimore Orioles and the 1975 World Series Champion Cincinnati Reds.  Rettenmund debuted with the Orioles in 1968 and enjoyed his finest season in 1971 in which he played in 141 games and his .318 with 11 home runs and 75 RBIs.  Rettenmund was traded to the Reds in 1974 and later to the Padres in 1976.  He signed with the Angels in 1978 and played his final three seasons there.

After finishing his playing career, Rettenmund served as a hitting coach for the Braves, Padres, Rangers and A's.

About This Card
The back of the card erroneously states that Rettenmund made the American League All-Star team in 1971. 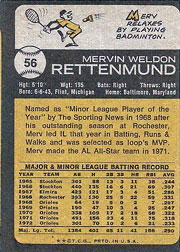